A SHORT HISTORY OF TORMARTON AND ITS CHURCH 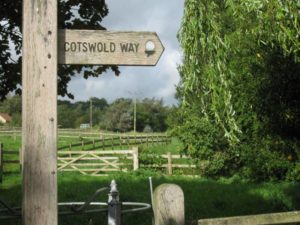 THE VILLAGE
The ancient village of Tormarton received its name from the Tower (Tor) of the Church, and from Meark, which in the Saxon language means Boundary (between Mercia and Wessex). The Domesday Book says that it was taxed at eight hides and that it paid a yearly rent of £12 in the reign of King Edward the Confessor, and £15 in the reign of William the Conqueror. There were twenty plow‑tillages, whereof eight were in demean (lower in dignity). It was in the Beredston Hundred.

The manor anciently belonged to the family of de la Rivere, and was a very large house standing on the south side of the church‑adjoining the present churchyard. Most of it was demolished in the Great Rebellion (1642‑1649), but a section (including a large kitchen and old fire‑places) remains, and forms part of the present Manor Farm. The de la Rivere coat of arms may still be seen on the exterior of the end wall facing the church. Richard de la Rivere had a grant of fairs in Tormarton  and of free‑warren in all his lands in England under Henry III. He also held the hamlet of Littleton. He was in rebellion against King Edward II and had his lands forfeited. But they were restored in the reign of Edward III. This manor was held by knight’s service. It passed to his son John. Later it changed hands many times. In these days too, the church owned one hundred acres of glebe land. The small cottage on the north‑west side of the present churchyard was once part of a college of priests.

The large house on the other side of the road, nearly opposite the church, is Tormarton Court. It was at one time the old Rectory. To the south‑west is another large house called “The Old Hundred.” The name ” Hundred” has several possible meanings. The dictionary definition is ” a subdivision of county or shire, having  its own court.” There are also two old curates’ houses in the village. The first, known as ” the Wellhay,” is behind what used to be the Post Office. The second is St. Mary’s Cottage, on the corner of the main street next to the small School, now closed, and converted into a delightful dwelling house.

A description of the village written nearly 300 years ago says, “the parish is seven miles in compass; it consists of arable. There are thirty houses in this parish, and about 130 inhabitants, whereof four are freeholders.

There are found in the north fields, stones, about the size of pistol bullets, which being broken look like iron ones. There are many cockle‑shells incorporated into large stones. A spring arising in Dodington, within a quarter of a mile of this parish, and called Tomery Well, has the petrifying quality of turning `wood into stone.” In 1825 there were 62 houses with 320 inhabitants ‑ much the same as today. It was then in the Hundred of Grumbold’s Ash.

THE CHURCH
Dedication in the name of St. Mary Magdalene.
The Church was originally under the jurisdiction of the Bishop of Winchester who “appropriated it ” to the Benedictine Abbey of Malmesbury in the reign of Edward III (1327‑1377). In the reign of Henry VIII the lands of Tormarton belonged to the Black Canons of the priory of Bradenstoke in Wiltshire. The Church was by then under the jurisdiction of the Bishop of Worcester. At the end of the fifteenth century it was in the deanery of Hawkesbury. The presence of Saxon stones mostly in Tower mean that there was probably a church here before the Norman Conquest.

Domesday Book date 1085‑6 states that there was a priest at Tormarton, which infers that there was a church here then, dating from Anglo‑Saxon days. ‘This AngloSaxon church must have been pulled down in order to build a Norman church of which there remain the 2 lowest stages of the Tower and the Arch and walls of the chancel, and the Tower Arch, all of which are late Norman. The chancel arch has remarkably fine capitals at the head of the pillars and two rows of zigzag. The uppermost stage of the Tower is in the ” Perpendicular ” style and dates from XV century.

Outside the east end of the chancel are two Norman “string‑courses” (raised horizontal hands running round or along the building). The upper one has what is called the “wheat‑ear” moulding and is not found except at Tormarton Church and Norwich Cathedral. The lower string‑course, which is “returned” on the North and South chancel walls, consists of the “billet” moulding – a very common Norman feature. Both these string‑courses have been cut into by the present East window and were covered entirely with ivy which was removed in 1913.

The north wall of the Nave (body of the church) is early English (XIII century). The south aisle with pillars and arches was added when Sir John de Rivere founded a college of priests here. The altar in this aisle was dedicated in the name of Blessed Virgin Mary. (This part of the church is in the “Decorated” style of architecture. This south aisle belonged for many years to the lords of the manor.

The Font is very graceful and beautiful. It is a most unusual shape and is Norman in style, with a rather later shaft. It was moved to its present position in 1907 from near the Lectern. The circular step is modern.

The Altar and reredos date from 1907 and are both of oak. The reredos has never been completed.

The South Porch dates from 1854 and was a part of the general “restoration” of the church.

The Western Annexe to the Tower forms a porch and seems to have been originally of the same date as the Tower itself, and to have been rebuilt probably in the 17th century. There seems to have been three doorways of which the West doorway is that still in use. The North and South Doorways were evidently walled up when the porch was re‑built. Their purpose cannot be explained.

At Barton‑on‑Humber in Lincolnshire there is a somewhat similar porch or annexe at the west end of the church, of Saxon or very Early Norman origin, and this is supposed to have formed a “galilee” or entrance vestibule to the Tower, which was the Nave or main body of the church. There was also a similar annexe opening eastward out of the Tower and containing the Altar and a space for the officiating Priest. This was afterwards pulled down to make room for the Present Nave and Chancel. The foundations of this small eastward annexe still exist at Barton‑on‑Humber beneath the floor of the Nave.

There may possibly have been a similar develop­ment at Tormarton Church. The West porch had an upper storey, forming a room lighted by a window over the doorway. The floor of this chamber is gone but its place can still be traced.

There is an unusual feature in the diagonally placed passage or “ambulatory” between the chancel and the east end of the South Aisle.

At the eastern end of the south wall of the chancel is a square ” aumbry ” or cupboard of which the door is missing. This was for the safe keeping of the Reserved Sacrament and of the chalice and paten.

Next to this is an arched recess which no doubt contained the “piscina” which was a shallow basin cut in the stone and having a drain for the water used in the cleansing of the sacred vessels. At this point in the wall outside the church is a walled‑in recess resembling what is usually called a “low‑side” or “lepers’ window. This must have been walled‑up when the aumbry and piscina were made near the High Altar.

Windows. East window is Decorated and dates only from the “restoration” of 1854. What was there before it is impossible to say, but probably a “churchwardens” window in a plain wooden frame!

The East window of the South Aisle has glass representing the Parable of the Good Samaritan: Date 1867. There is a stained glass window of hectic colouring in the middle window of the Nave, rather in the Munich style but by Gibbs. Date 1871. Subject‑Pool of Siloam. The old glass from the East Window was placed in the West window of the side aisle.

1.  A beautiful “brass” in the floor of the Nave. A man in civilian clothes with a “penner and inkhorn” at his girdle. The inscription is in Latin and is enriched by charming little designs between each of the words: The English as follows:

“Pray for the soul of John Ceysill formerly servant (?steward) of the Honourable Lord John Sandlow (St. Loe) Knight, which John Ceysill closed his life on the Eve of St. Bartholomew the Apostle (i.e. August 23rd) in the year of our Lord 1493 and ninth year of King Henry VII On whose soul may the Most High God have mercy. Amen.”

2. On a large slab in the floor of the chancel is the matrix or outline of the brass figure of Sir John de la Rivere who rebuilt the body of the Church in Edward III’s reign. The brass has long been stolen. but the outline shows him in armour and holding in his hand the model of a church. He was not (as stated in a brass plate) the “Founder” of Tormarton Church but was a great benefactor and the founder of the chantry in the South Aisle and of the College of Priests here. This college consisted of a Warden who was also Rector of the parish, and four “chaplains.” Its existence had been forgotten until a document was found in the 19th century in the Vatican Library at Rome (Vol. VII of Papal Registers) dated 1417 to 1430, and being a Mandate to the Bishop of Worcester that one of the chaplaincies was to be suppressed on account of insufficient endowments.

3. A quaint inscription on the wall under the East Window of the aisle to the memory of two Russells, father and son, who were stewards of the manor to the Marquess of Newcastle for 90 years‑and in memory of Katherine, wife of Gabriel Russell, dated 1667. They were faithful we are told.

“Here Gabriell Russell lies whos watchful eyes:
Where William, Marquess of Newcasele, spies:
Over three parishes this onely hands:
Were three entrusted with his lordships lands:
Full ninty yeares my father and I, ware servants to that nobillyty:
But all that knew them did them witnes bare,
Of their just dealings, loyalty and care
And for their comfort here below:
One and twenty children could they show.”

4.  There is a stone tablet with two cherubs and a coat‑of-arms showing a mailed fist gripping a bloody hand; it is to Edward Topp who once held the Manor.
And the inscription reads:‑

“Near lyeth inter’d the body of Mr. Edward Topp, son of Lingen Topp of Witton in ye County of Salop. Esq. Late High Sherriffe of that County: and son of Alexander Topp of Witton, Esq. Son of John Topp of Stockton in the County of Wilts. Esq. who departed this life ye 15th day of May, in the 50th yeare of his Age and in the yeare of our Lord 1699.”

In the tower there is room for a peal of bells, but we have only one!

A Scratch‑dial (old sun‑dial) may be seen by those with good eyesight high up on the N.W. corner of the tower. It is upside down, and was evidently removed from its original and correct position on the south side of the Nave exterior at one of the restorations.

The avenue of yews leading to the church is probably over 400 years old.